According to the back of the cover a person with the family name Göterstad sent an express letter to Mrs. Anna Wassberg in Stockholm in May 1952. The letter was handed over to the Post Office Falun 2 at Kyrkbacksvägen 23 ( 23 Church Hill Streeet) in the town Falun 196 km north west of Stockholm and delivered to Mrs. Wassberg living at Västmannagatan 24 (24 Västmanna Street) in Stockholm. The letter was mailed on Saturday 24 May and arrived at the Post Office Stockholm 1 the next day, also according to the back of the cover. Stockholm 1 was co-located with the head quarters of the Swedish Post at Vasagatan (Vasa Street), where the Swedish Post filled up two blocks. Falun is the capital (county seat) of Kopparberg County in the part of Sweden that is called Dalarna.

Below is a picture of were the Post Office Falun 2 used to be. Well, Falun 2 seemed to have been a pretty small Post Office to me. I wonder when it closed down and how many that worked there. Did the Postmaster live in the attached house?

This parcel containing a sweater was sent from the Post Office Stockholm 3 at Sveavägen 31 (31 Svea Road) to Mrs. Swedmar living at Ejdergatan 31 (31 Eider Street) in nearby Saltsjö-Duvnäs, a suburb south east of Stockholm city centre. The parcel was handover to the postal services the last day of November 1960 and it arrived the next day at the Post Office in Saltsjö-Duvnäs, two days later which was a Saturday Mrs. Swedmar came by and picked it up.

The postage rate consist of 1.40 kr for a parcel  - 1 kg and the C.O.D. (Cash On Delivery)  fee 40 öre when the amount is paid directly to the Postgiro, an account at the Swedish Post. The Postgiro was  the Swedish Post's money transaction system, you can read more about Giro transfers here. Two 90 öre blue Rock Carvings covered the totaling postage rate of 1.80 kr. The 90 öre blue was one of the five original stamps of the Rock Carvings issued in 1954. The easiest way of finding that out is that the names of the artist and the engraver is missing at the bottom of the stamp. Read more about the Rock Carving series - here.

We do not know who sent the parcel since that part is missing. Maybe a fancy fashion shop on Sveavägen? Below is a street view from Google showing the building were the Post Office Stockholm 3 used to be. There are no Post Offices left in Sweden for the public anymore. All postal services can be found in corner stores, gas stations and other kind of convenience stores.

15 öre brown Gustaf V, version I or is it version II?


The 15 öre brown came in two varities because two different dies were used. Actually three dies were made but one of them was not used at all. The first die was used in late 1939 to print the special war stamps. These stamps were the 5 öre green, 10 öre violet and the 15 öre brown. They were transported away from Stockholm and the purpose was to use them in case the Swedish Post's printing-shop at the headquarter in Stockholm would be destroyed because of the war. Die number one was used for this special issue. The war stamps were printed in sheets of a 100 stamps and they had 4-sided perforation. The difference between the dies is that die one resulted in a more deeper brown colour were the base of the figure 1 is narrower and the oak leaves on the collar are more detailed (more lines).

Maybe the easiest way is to use a 4-sided perforated as a reference because we know for sure that were are looking at version II. Lets have a look at the war issue. It has a distinct brown colour.


Enlarge the picture above by clicking at it and 1)  look at the base of the numeral at the figure "1" and 2) look at the oak leaves of the collar. 3) Note that the medal band on the king's left side is more detailed as well in version II.

Compare it with the stamp below which is of version I.


Remember that a four sided perforated stamp always is a version II.

Version I has definitely a lighter brown colour and the collar is less detailed, the base of the figure "1" is more distinct. The medal band is light and less detailed, right?


Test your self, which one is version I and II? 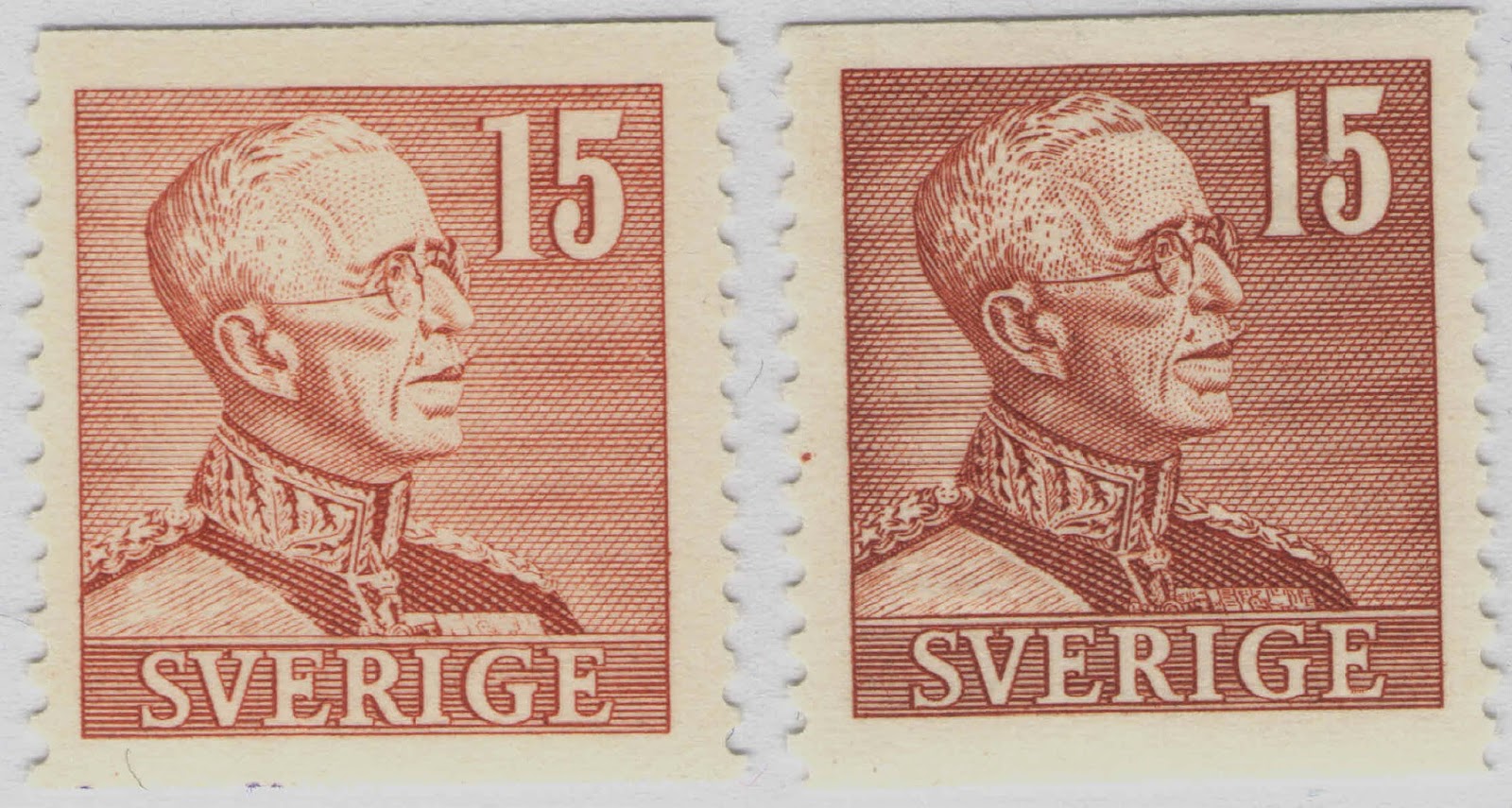