Stamps in the back

The amount 4 kr 80 öre is written where the stamps should be and the note in blue ink to the left says "stamps - turn", in other words: for stamps please look at the back of the card. 4.80 was in February 1971 the rate for domestic parcels weighing more than 1 kg, but less than 3 kg. The weight of this parcel was 2 kg. 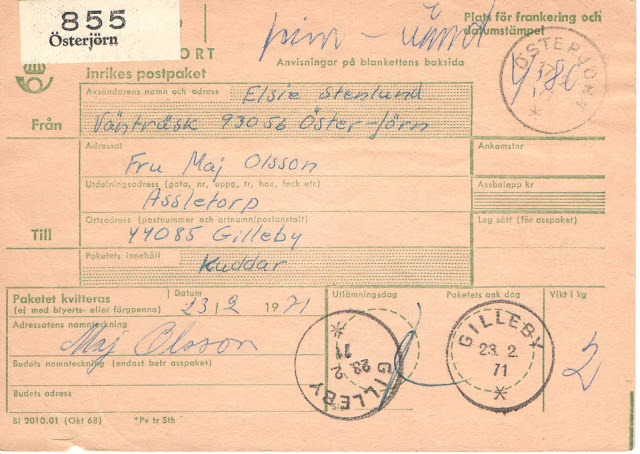 The parcel was handed over to the Post office in Österjörn on Wednesday 17 February 1971 by Mrs. Stenlund. It contained 2 kg of pillows, must have been pretty small pillows and heavy ones too. The Post Office clerk brought out four  1 kr Dancing Tranes, one 50 öre Gustaf VI Adolf type III and in addition, a commemorative stamp, the 30 öre 300th Anniversary of the Swedish Lighthouse Service. That last stamp should have been sold out by then, normally commemorative stamps were for sale six to eight months or so, not for well over a year like in Österjörn.

The pillows went from Österjörn to Gilleby, and arrived the following Tuesday. That is a pretty long time, six days. The receiver Mrs. Olsson picked it up the same day. Both Österjörn and Gilleby are rural places indeed. The village Österjörn is situated in the inland of the province of Västerbotten in the north and Gilleby village is on the island of Orust at the Atlantic coast of Sweden. The Gilleby Post Office was closed 31 March 1973 and the Post Office of Österjörn lasted three more years.

In August 1971 the postal rate for a Swedish domestic parcel weighing up to 1 kg was 3 kr 80 öre. At this time there was no specific definitive stamp with that denomination as it use to be in the sixties. The postal rates were raised much more frequently from the end of that decade and a specific stamp for parcels up to 1 kg would have been short lived. The 3 kr 80 öre rate was effective just a mere nine months.

But there was the 3 kr green-blue Seal of Duke Erik Magnusson 1306 from April 1970 and combined with the 80 öre blue/brown The Waxholm boat from January 1971 they would sum up to 3 kr 80 öre. Pretty convenient, but not at the Post Office Kungälv 1. They used one 30 öre red-orange/blue Outer archipelago of Stockholm at the front and five 70 öre red-lilac Gustaf VI Adolf type III at the back. The first one is a complimentary denomination but the 70 öre was aimed for international letters first weigh class (- 20 g). That worked too. 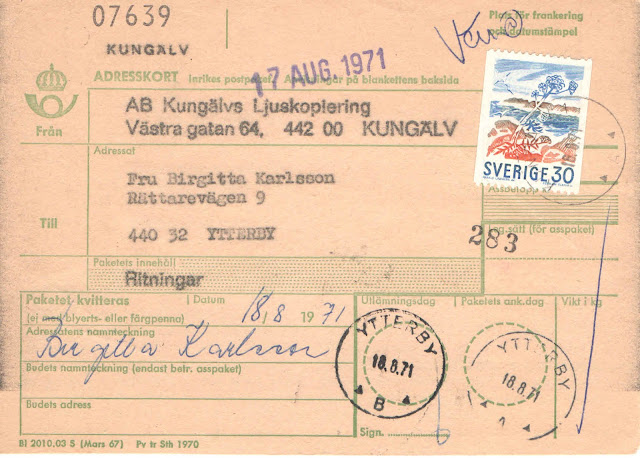 The parcel contained blue prints and it was meant for Mrs. Karlsson living in Ytterby. Ytterby is situated about 4 km outside of Kungälv. The address of the Post Office Kungälv 1 was actually Ytterby Road (Ytterbyvägen) the road that went to Ytterby. Most likely the old road to Ytterby.

... today according to Google Street