W. H. Reisner Manufacturing Company Inc. in Hagerstown, Maryland manufactured mechanical and optical instruments, stamped metal works, and did nickel plating, and in addition manufactured pipe organ hardware and accessories, the firm founded in 1902. They sold their products throughout the United States, and to many foreign countries, including England, France, Germany, Japan, Mexico, Cuba, Australia and even Sweden.

The letter cover at the top is from the firm Nygren's Fishing Equipment Shop at the Warehouse Street 12 (Magasinsgatan 12) in Göteborg (Gothenburg). Apparently they urgently needed new gear and sent an order by air mail to W.H. Reisner. I wonder what kind of products they ordered from far a away America? Nygren's was still in business in the seventies.

Göteborg is the second largest city in Sweden and situated 397 km south west of Stockholm at the Atlantic coast of Sweden. The stamps were cancelled on Thursday 23 August 1945 at the Post Office Göteborg 2 at 3 Oak Groove St. (Ekelundsgatan 3) It is also stamped with the text "By air to the United Kingdom" which meant that the letter went by air to U.K, but by boat over the Atlantic.

The second letter cover is from 1954 and the sender is Hans Christian Schuster,  he was a pipe organ builder. Mr. Schuster was also a quite succesful long-distance runner. He won the Swedish championship 20,000 m in 1922 and participated in the marathon at the 1920 Summer Olympics, Antwerp, Belgium. The letter started its journey on Tuesday 6 April 1954 at the Post Office Stockholm 9 at 160 - 168 Horn's St. (Hornsgatan 160 - 168). This time the letter went by air all the way to North America.

International letters in the summer of 1964


Govenius & Dahlgren was a company in the chemical industry with a focus on wood conservation and protection from insects - the ones that like to chew on wood. They even publish some books about this and the author was one of the partners, Mr. Bertil P. Govenius. The firm corresponded by this time with a company in Germany called Dedelux Chemie GmbH (GmbH is like Limited). The Dedelux Chemie is actually still registered as a company in Swabia which is a part of  Bavaria, but Govenius & Dalhgren seem to be long gone.

The first letter was posted Wednesday 20 May 1964 at the Post Office Stockholm Ban, the Post Office at the Stockholm Central Station. In May the postal rate for an international letter  - 20 g was still 50 öre and there was of course a suitable stamp in the Gustaf VI Adolf, type III definitive series that covered that, the 50 öre olive-green.

The rates for international postcards and letter from July 1962 until June 1964:


The next letter was posted on Friday 31 July at the Post Office Stockholm 1, it was co-located with the head quarters of the Swedish Post at Vasa Street (Vasagatan), where the Swedish Post filled up two blocks of buildings. The 60 öre red was a new and fresh stamp in the Gustaf VI Adolf, type III series issued in June.  As it seems those new stamps were not around when the letter below was posted. If the stamps were applied by the firm themselves or by a service minded postal clerk I do not know, but someone used a 10 öre blue New Numeral Type, type II, the 15 öre red Gustaf VI Adolf, type III and the 35 öre blue Gustaf VI Adolf, type III . The last stamp, the 35 öre blue was the stamp that used to cover the most common postal rate; the one for domestic letter  - 20 g, but since 31 days it was obsolete in that role. Maybe the stock of that stamp had to be finished before the new ones could be used?


The new rates for international postcards and letter from July 1964:

I have actually a third letter from the Govenius & Dahlgren firm. It was posted Wednesday 16 September and this time it was handed over to the care of the Swedish Post at Stockholm Ban again. The stamp is a commemorative stamp, the booklet version of the 60 öre brown 800th Anniversary of the Archbiscopric of Uppsala. That stamp really do not belong to this blog, but it is okay.

You can read more about the New Numeral Type series  - here and about the Gustaf VI Adolf type III series - here.


This is a great example how the higher denomination stamps for parcels were supposed to be used. One single stamp and it is done. Swift, fast and an everyday routine. This parcel weighed up to 3 kg and in the fall of 1970 4 kr and 50 öre was needed to cover the postal rate. The stamp is the 4.50 kr red Uppsala Cathedral issued in March 1967. The Uppsala Cathedral stamp was a new kind of definitive stamp series, consisting of only one stamp. (The 4.50 kr Ale Stones from 1966 was the first one of this type.) That was a novelty during the mid 60s and a change of policy. So far stamps aimed for parcels were issued in longer series with several stamps often spanning over decades. The Swedish stamp policy shifted remarkably during 1967. This stamp was soon followed by the 7 kr Gripsholm Castle and the 3.70 kr Lion Fortress was issued in already in February 1967.


Nilfisk is a Danish company that sells vacuum cleaners, they are still around. They seem to have had a sales office in Luleå, it is situated 727 km north east of Stockholm. On Monday 9 November 1970 the local office felt like they had to return some surplus vacuum cleaner parts back to the companies logistics centre in Malmö south of Sweden. At least that is the information the parcel address card hints us about. 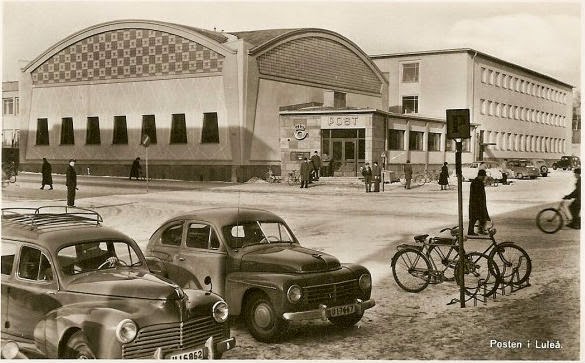 The parcel went to Malmö and made a stop first at the post office depot Hullkajen (the Hull quay). The next day it reached the post office Malmö 4 at 31 Great New Street (Stora Nygatan 31). Why it first arrived to the depot at the Hullkajen I don't know. The depot Hullkajen was in service between 1965 to 1975 and it belonged to the main Post Office, the Malmö 1. The square stamp on the card put there by Malmö 4 says that the parcel can be picked up at lanes 18 or 19 at the Post Office.

Mixed stamps from Stockholm to Malmö


Parcel address cards are of course more interesting than clips. A card gives you much more information. However there are much more clips around and why not study them as well. Sometimes they might give you some new insights or different perspectives. Lets have a look at two clips stamped Wednesday 6 December 1939.

The left one was sent from Post Office Stockholm 9 Hornsgatan 160 - 168 (160 - 168 Horn's Street). At that office they apparently had to mixed the old series for parcel fees the Crown and Posthorn with the successor the Three Crown. Maybe they still had a big surplus of  the old 60 öre Crown and Posthorn? Considering that the new 60 öre red-carmine Three Crown that replaced it by that time had been around for almost 10 months it is a little bit puzzling that the old one is still used. It seems like the 120 öre Crown and Posthorn was already replaced by the brand new definitive stamp 120 öre Three Crown. The 120 öre had been in use just for two weeks that day.

The right clip was also sent from Stockholm but from the Post Office Stockholm 7 Norrlandsgatan 11 (11 Norrland Street). Here the 1 kr orange Crown and Posthorn was still in use but they had started to use the new definitive stamp of king Gustaf V, type I. The latter had been around since February so that made sense, but the type II was in progress with the first release on 11 December (the 10 öre violet) and the new 20 öre red type II would show up in April 1940. The new 1 kr orange Three Crowns was issued in September but not used yet at Stockholm 7, apparently.

It is interesting to see that the post offices first had to use the old stock of stamps before they could use the new ones. There were a lot of parcels sent in December so my guess is that pretty soon both Post Offices were using the new definitive series.

Read more about the Three Crowns series - here, and about the ill fated Gustav V, type I series - here. The Crown and Posthorn is briefly described - here.

Above is a street view from Google Street View showing the building were the Post Office Malmö 1 used to be. There are no Post Offices left in Sweden for the public anymore. All postal services can be found in corner stores, gas stations and other kind of convenience stores.