The Gustaf VI Adolf, type I series began to be designed in February 1951, about three months after the previous king’s death, Gustaf V. The artist David Tägtström painted the new king’s head in a relief profile. The purpose was to make a more timeless portrait, almost coin like, that would last for more than a decade. Mark Sylwan designed the stamp and it was engraved by Sven Ewert.

The Swedish Mail decided to emit the new series with the denominations 10, 15, 20, 25 and 30 öre only. 5 öre was still needed but only as a compliment and therefore the new 5 öre stamp was issued in a new series of it owns, the New Numeral Type. From now on the lowest denomination for the definitive stamps of the king would be the rate for printed matters.

More extraordinary was the fact that no 35 or 40 or 50  öre stamps were issued by Swedish Post in 1951, as they had done with the old Gustaf V series. So far the policy had been since the late twenties that the definitive stamp of the king covered all lower denominations up to 50 öre in intervals of 5 öre. Eventually a 40 öre stamp came 1952 due to changes of the postage rates. For this series a new policy was formed which meant that the raises of the postage rates for printed matters, post cards and letters would spawn new stamps, not  any longer could single stamps of the series cover the rates for registered mail, express fees, C.O.D, parcels, e.t.c. as with the old Gustaf V series. Those rates were taken care of by the Three Crowns and later on also the Rock Carving series.

The colour scheme was first of all decided by the UPU-colours; green for international printed matters, red for international postcards and blue for international letters ( - 20 g). The other colours were more or less inherited from the previous Gustaf V series. The quantities of the first issue was pretty modest because a year later the postal rates were changed again and new stamps were required.

The second issue of Gustaf VI Adolf, type I series was released due to the changes of the postage rates that came effective in July 1952. Since Sweden was still compliant to the UPU-colour scheme there had to be several new stamps. 20 öre red was replaced by the new 20 öre grey, 30 öre blue was replaced by the new 30 öre brown, and 25 öre red and 40 öre blue was introduced. The rate for international printed matter was yet 10 öre and the stamp 10 öre green was therefore still in use. This was the last time a definitive series of the Swedish king was compliant with the UPU-colour. The last Swedish stamps with correct UPU-colours were issued in late 1953.

This was the release of the 100th booklet by the Swedish post. It contained 20 stamps forming 10 pairs. The value was 4 kr.

It was no secret that the  Swedish Post was not entirely pleased with the new Gustaf VI Adolf, type I. The stamps had defintely  a clean and neat design. However it was believed that the background of the stamps was engraved to shallow and the colours became not distinct enough. Hence the Swedish Post tried some changes of the colours in 1954. The first denomination was the 40 öre that got a different colour, a green colour, actually the same colour as of the 10 öre above. That was not a new colour really, and the background was still as shallow as before. Well, since the Swedish Post had decided to not be UPU-colour complaint any more they were now free to choose any colour. The old blue UPU-coloured 30 öre was cancelled. But why use the same green colour that was used before?

The next denomination to be recoloured was the UPU-coloured 25 öre red. Now it became blue, the same blue colour as the just cancelled 30 öre blue from 1952. Also a little bit puzzling.

The 25 öre blue was also issued in a booklet. The value was 5 kr and the number of stamps were twenty.


The 2-sided perforated stamp above was issued as ordinary coil stamps, but the new blue 25 öre was also issued in slot machine booklets for the first time. Until now stamps were only available during opening hours but with slot machines stamps could be provided 24 hours a day. Slot machines was definitely a novelty and the 25 öre blue was the first stamp to go. The first limited batch of slot machines were first configured for 2 kr. The booklet hence consisted of eight 25 öre blue Gustaf VI Adolf type I. The other batch of the slot machine was configured for 1 kr and the booklets consisted of four 25 öre stamps. The cover was made of thicker and harder paper than the normal booklets sold at the post offices.

Another novelty was that the booklet and stamps came in new interesting combinations never seen before since the stamps got vertically cut corners. It was because of the way the stamps were glued on the cover and the way they were cut resulted in two different combination of the booklet. The margin could be at the top or at the bottom of the stamps. If the margin was at the top it resulted in a vertical cut along the bottom of the stamp pairs, if it was at the bottom the vertical cut was along the upper side of the stamps. Lets have a look how this works.

The margin is at the top, above the stamps, then the last pair look like this:

The margin is at the bottom, below the stamps, then the first pair look like this:


The stamp pairs between the margin and the first/last pair, look like this:


There is a post that explains how it works in detail - you can find it here.

The recolouring had to affect the 10 öre denomination as well since the new 40 öre had the same colour as the 10 öre green from June 1951. The new 10 öre became brown. The same brown colour that the 30 öre issued in July 1952 which got replaced the month before by the new 30 öre red.

that was an exception, because two oter booklets that were released during the mid-fifties contained ten 10 öre  brown Gustaf VI Adolf type I or four 25 öre Gustaf VI Adolf stamps. (There was also actually a commemorative booklet as well, celebrating the centennial of Swedish stamps in 1955.)

and also, oddly enough, as late as in June 1957. Just a month before the release of the new Gustaf VI Adolf type II series. 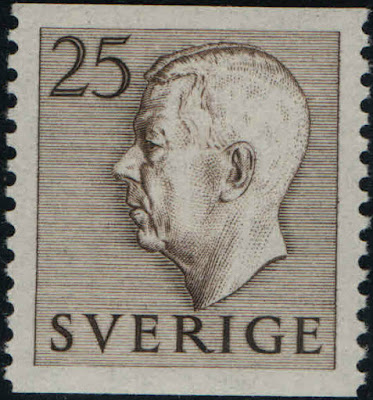