The Three Crowns series on its way out . . .

The 10 öre denomination from the series Definitive Stamps came as a booklet, the same with the 50 öre green Gustaf VI Adolf type III and then there was the 2 kr wine-red Three Crowns. This was the last stamp of that series. The first stamp of the Three Crown series, the 60 öre red-carmine, was issued on 10 February 1939, almost 30 years earlier. The series came in 34 denominations. The original idea was that this series should cover the fees for the most common postal rates for domestic parcels and C.O.D. parcels.  That was not the case with the 2 kr wine-red, it could be used a single stamp for domestic letter -250 g, it could also be used for various money orders  until 1971 and later on  used for international letters  -50 g between 1975 and 1976. Read more about the Three Crown series - here.


The 10 öre blue/black Swedish ship in Öresund represents the new kind of definitive stamps that showed up for the first time in 1965, like the Posthorn and the Ale's Stones. The 10 öre belongs to the series called Definitive Stamps and it was first issued in 1967. The series emphasized the new issuing policy of Swedish Post with definitive stamps in smaller series and adding the concept with different motifs within the same series. That was a big novelty in 1967. The Definitive Stamps series and the Iron Age slot machine booklet were examples of that. Why Swedish Post almost two years later choose to issue a booklet with twenty 10 öre stamps from that series beats me.

The 50 öre green Gustaf VI Adolf was first issued as a two sided perforated stamp in January 1968 and now a year later it also came in a booklet with ten stamps. There was an earlier 50 öre stamp in the series, the 50 öre olive-green from July 1962 where its single use covered International Letter  - 20 g until July 1964. The reason why there was a new need for that denomination in the series was that the rate for C.O.D became 50 öre in 1967. Oddly enough the fee 50 öre lasted only until March 1969. That must have been some what of a bummer, but 50 öre probably did good use as a complimentary denomination for the following years.

On Wednesday 4 December 1968 it was time to return a movie that have been shown in the small town of Karlshamn in the southern Sweden to the movie production company Swedish Culture Films Inc (AB Svensk Kulturfilm) in Stockholm. Mr. Jönsson carried the parcel to the Post Office in Karlshamn. The next day the parcel arrived in Stockholm and was picked up on Thursday 5 December. The card was printed with the address to the movie company. But it was not really completed since by this time the novelty of postal codes were used. The postal codes were introduced in May 1968 in Sweden. In this case the postal code 111 20 was stamped on the card. The parcel reach its destination the Post Office Stockholm 1 located at 28 - 32 Wasa Street, the funny thing is that the office of the movie company was just across the street. The company also assures that the film was fireproof.

The Swedish Culture Films was not the most productive production company. Actually they produced only nine movies between 1949 to 1957. Mostly documentaries and short films. They were also distributors of religious movies in the fifties. Not all of them were even sound film and of course they were shot in black and white only. The first movie got a sound track recorded in 1968 and maybe that was the movie that were shown in Karlshamn?

Where is the place?
Karlshamn is situated 400 km SW of Stockholm. the distance by road is 532 km.

The stamp of the Gustaf V right profile series that was issued in the greatest number including all varieties, was the 20 öre red Gustaf VI right profile type II. Which should not be a surprise to hardly anyone. After all it covered the rate for the most common postal item - the domestic letter first weight class (up to 20 g), international postcard and the extra fee for registered mail until April 1948. In addition, during a time when the postal rates were not changed that often. It was hence around for a very long time period compared to commemorative stamps and other definitive stamps further on.


As a good number two is the 5 öre green. It was around from January 1941 until April 1948 when it was replace by the 5 öre orange. The 5 öre green covered printed matters.

It was a hard struggle about the third place, but the 10 öre violet type II was issued in a mere million more than the 15 öre brown. The 10 öre violet was used for local letter  - 20 g until July 1944 as well as for domestic postcards until April 1948. 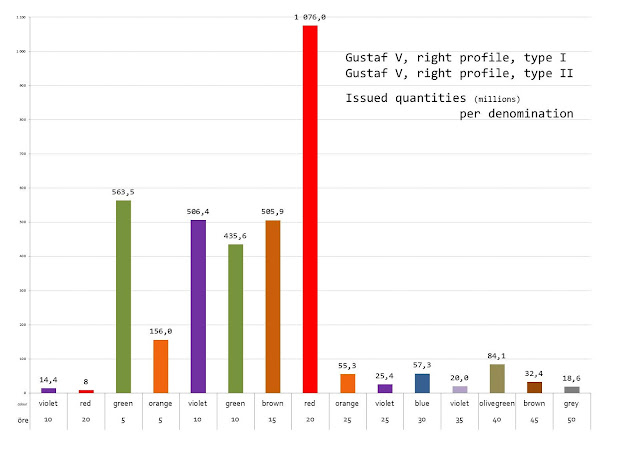 The 15 öre brown was used for domestic letter  -20 g until April 1941, local letters after June 1944  and also for domestic postcard after April 1948, that is an explanation why the number was pretty high.

The 10 öre green replace the 10 öre violet in April 1948 because the rate for international printed matter (and domestic) was raised from 5 to 10 öre. Since Sweden still complied to the UPU-colouring principle the 10 öre stamp had to be green. The old 5 öre green was replaced by the 5 öre orange.

Among the higher denomination the 40 öre olive-green sticks out. I think the main reason is that 40 öre was the total fee for registered domestic letter  - 20 g until April 1948 and also it covered domestic letter second weight class (20 - 125 g) from April 1942, as well as local letter  - 500 g until July 1944. To me it was a little bit surprising that the 30 öre blue was issued in a comparatively small number. After all it covered the rate for international letter first weight class for a long time, from April 1940 until approximately June 1951.

Lastly, there are the two stamps that were issued in really small number and they are of course the only two stamps in the type I series issued in spring 1939. They were withdrawn and re-engraved.


By some reason Lingbo Manufacturing Incorporated (Lingbo Verkstäder AB) at the absolute beginning of the new year 1968 needed some thermometer glass and quickly.  The weight was under 1 kg, but of course it was fragile. Labels with the text Colis Fragile, Exprès and Urgent in French were attached.

The first stamp we notice is the upside-down 3.70 kr violet the Lion Fortress. It was issued in February 1967 and its main purpose was to cover the rate of domestic parcels, 1 - 3 kg.

Then there are four 45 öre orange Gustaf VI Adolf type III series. That is maybe more surprising in the beginning of 1968. It is the 3-sided perforated version and they came from the 190th booklet. Unfortunately they are vertical pairs and not the preferred horizontal ones and there by not really interesting for stamp collectors. The 45 öre orange Gustaf VI Adolf came in October 1964, but then only in the 2-sided perforated format. It was not until January 1967 until the booklet showed up. The reason was that the postal rate for domestic letter  - 20 g was raised from 40 öre to 45 öre effective 1 January 1967. Since 1957 the Swedish Post had followed a policy that the stamp for domestic letter - 20 g (first weight class) should have a blue colour. Quite like the by now abounded UPU-colouring policy, but for domestic letters. It had the same side effects which meant that existing stamps had to be cancelled and new blue ones printed. But orange is not blue, it was not until June 1967 when the 45 öre ultramarine Gustaf VI Adolf arrived and replaced the orange one. It is remarkable that it was almost six months after the raise of the postal rate.

However in January 1968 the 45 öre ultramarine should have been used. Maybe the Post Office Johanneshov 4 had a surplus of the old 45 öre booklets and they wanted to get rid of those stamps first. Johanneshov 4 was situated in Bagarmossen a suburb to Stockholm.


The stamps on the backside are the 10 öre ultramarine-blue New Numeral Type, type II from 1961 and the commemorative stamp 35 öre red-violet World Table-tennis Championship. The championship was played 11 - 21 April  1967 . . .  Also a quite obsolete booklet stamp in January 1968.


Where are the places:
Bagarmossen is a suburb of Stockholm situated 7 km SE of the city centre.
Lingbo is situated 205 km NW of Stockholm.
The distance by road is  233 km between the two places.


The Three Crowns series was originally designed to have single stamps for the most common postal rates for domestic parcels and Cash On Delivery domestic parcels. The first stamps in the series released in 1939 covered parcels up to 1 kg, 1 - 2 kg and 2 - 3 kg for those postal rates. There was also a complementary denomination, the 1 kr orange Three Crowns, which could be used for heavier parcels.

The domestic parcel card below was sent on Friday March 25 1966, almost 26 years after the first issue of the Three Crown series and it was still doing its job. A single 2.30 kr dark brown Three Crowns was all that was required.

However, things had already started to change. The new postal rates for parcels effective from July 1965 was like this: [all amounts are in öre, 100 öre = 1 krona]

The Three Crown series was for the first time no longer covering the three most common parcels rates with a single stamp since the highest denomination in the series was the 3 kr blue Three Crown issued in 1964. Instead the rate for  parcels 3 - 5 kg now was covered by the new 3.50 kr Ale's Stones. It was a single definitive stamp, no more long definitive series issued over decades. That was a novelty in 1965.

The incorporated company Swedish Mullard (Svenska Mullard AB) sent some vacuum tubes to the Sahlgrenska Hospital, Oncology Department, in Gothenburg (Göteborg). Swedish Mullard was a subsidiary to Mullard Ltd. which originally was an English firm that pioneered in producing high quality vacuum tubes. They also pretty early teamed up with Dutch Philips. Mullard is not anymore, there last production facility closed down in the early eighties.


Where are the places:
Gothenburg (Göteborg) is Sweden's second largest city and it is situated 397 km SW of Stockholm.
The distance by road is 470 km between Stockholm and Gothenburg.